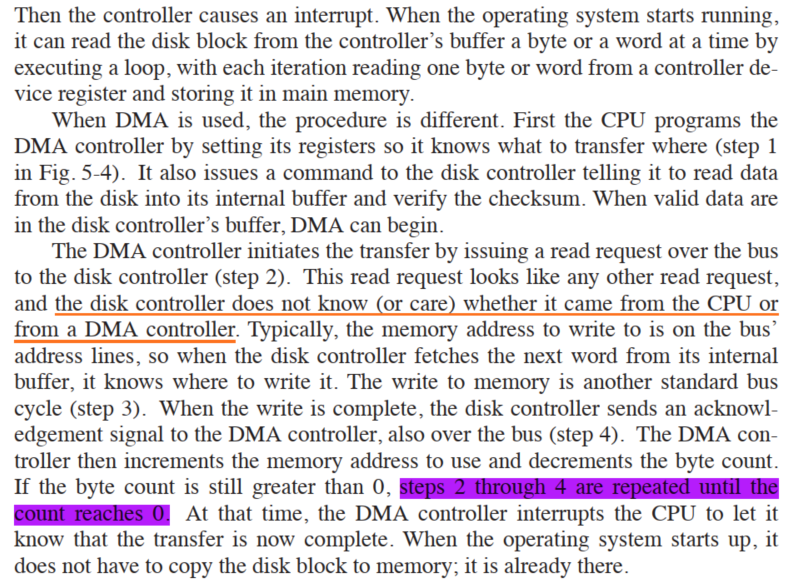 Let’s review how a DMA transfer takes place, considering only input transfers to simplify the discussion.

Data transfer can be triggered in two ways: either the software asks for data (via a function such as read) or the hardware asynchronously pushes data to the system.

In the first case, the steps involved can be summarized as follows:

The second case comes about when DMA is used asynchronously. This happens, for example, with data acquisition devices that go on pushing data even if nobody is reading them. In this case, the driver should maintain a buffer so that a subsequent read call will return all the accumulated data to user space. The steps involved in this kind of transfer are slightly different:

As an example of how the DMA mappings might be used, we present a simple example of DMA coding for a PCI device. The actual form of DMA operations on the PCI bus is very dependent on the device being driven. Thus, this example does not apply to any real device; instead, it is part of a hypothetical driver called dad (DMA Acquisition Device). A driver for this device might define a transfer function like this:

This function maps the buffer to be transferred and starts the device operation. The other half of the job must be done in the interrupt service routine, which looks something like this:

The steps involved to transfer the data to the device could be summarized as follows :

And there you have it. The data is transferred to the device!